Have you ever had a can of condensed chicken soup? You know - the kind that comes with a white and red label around it? Sure, it might taste okay, and it hits the spot in a pinch. But let's be honest - there is simply no comparison between that and a pot of homemade soup. Why do you think that is? Is it the ominously long list of strange ingredients and preservatives? Or the massive amounts of salt? Or the fact that it's been sitting in a questionably prepared tin can for months? Maybe it's a combination of all of these things. When it comes right down to it, it's pretty clear. Machine-processed, preservative-laden food will never compete with real food, made from real ingredients, by a real person. Period.

Everybody knows that the real thing is always better.

So why should websites be any different?

Sites built using a Wordpress theme are a lot like condensed soup. They contain a lot of questionable ingredients that you probably don't want there. The overall ingredient list is bloated. And at the end of the day, it's tough to have a healthy website, when it's filled with garbage.

That is why Right Creative builds custom sites, from scratch. And the stark reality is - Wordpress-themed sites will never be able to compete with a handcrafted site.

I can think of several reasons, but just to list a few...

It has been shown time and time again that Wordpress plugins slow your site down. Consider this list of 65 plugins that slow down your site. If you are currently a Wordpress user, you are sure to recognize many of the plugins on that list. Beaver Builder, Yoast, Google Analytics, ShareThis, and WP Bakery are just a few that are on nearly every Wordpress site we see. And yes, every one of them decreases your sites loading speed little by little.

So what's the big deal? Well.. according to this article, pages that take longer than 3 seconds to load lose a whopping 53% of mobile users. That's over half of the people coming to your site, leaving, because it wasn't fast enough. Make no mistake - site speed is absolutely critical to your bottom line.

If you're not a web-developer, this might not seem like a big deal, but it really is. Website Accessibility refers to a users ability to easily access and understand the content of your site. It is a frustratingly common mistake to assume that everybody interacts with your website the way that you do. Consider the blind user. Blind users often rely on what are known as screen readers to help them access the web. And Screen Readers often rely on semantic, well-formed code in order to properly read and establish context of a page.

Incidentally, Wordpress plugins and page builders are notorious for spitting out bloated, overly complex, non-semantic code. Not only does this make your page exceedingly difficult for a screen reader to interpret, it also contributes to a slower website.

With a handcrafted website, you have complete control over the code that is produced, the order that it displays on a page, and it will almost always be cleaner and less bloated than its Wordpress counterpart. Wordpress may be many things - but succinct is not one of them.

There is no question that Wordpress is a massively popular platform. Unfortunately, because of it's popularity, it is a prime target for malicious attacks.

Recently, I received an email from an online forum stating that their site was one of over 700,000 hacked, causing any visitor to the site to be redirected to a different site. And unfortunately, that was not even close to the first, or the largest attack of its kind.

Wordpress themes and plugins need to be updated on a weekly (if not daily) basis. When plugins become outdated, they become susceptible to all sorts of security issues. And while it might not be too big of an issue to update your plug-ins regularly, you also need to be careful that these updates don't break your site. This unfortunately happens frequently enough that it is worth mentioning. And when it happens, trying to figure out the right combination of plugins to activate/deactivate can be a very frustrating game indeed.

The advantage of using a non-wordpress site here is clear. In the same way that a virus wreaks more havoc in a heavily populated city than it does a small rural town, a non-Wordpress site will draw a lot less negative attention.

Managing Wordpress sites has become something of an art. Between Wordpress system updates, plugin updates, PHP updates, database updates and server updates, there is almost always something that needs to be updated which also has the potential to cause your site to crash. If you are a network administrator or unusually skilled web developer, this might not be a big deal. But, seeing that the entire reason most people use Wordpress is because it promises clients the ability to edit their own site - MOST common users are not going to be able to resolve these issues on their own.

The Illusion of Control

As I just mentioned, the biggest selling point of Wordpress is that it supposedly allows clients to be able to edit their own website.

In the years that I've' been doing this however, I have found this to almost never be the case. Make no mistake - in order to be proficient with Wordpress, you need to be a tech-savvy user. And the unfortunate reality is, if you are not a web-designer or developer, there's a good chance you are not interested in doing the job of one. In the same way that just because I might be able to install a ceiling fan, it does not mean I have any interest in becoming an electrician.

But - just to play the devils advocate here... let's say that a user is tech-savvy enough to know their way around Wordpress. There is still the issue of design - and that's a pivotal point. One of the most common scenarios that we see is a website that starts out looking great, only to look dilapidated and tacky a few years later, because non-designers were in charge of updating the site.

I think we can all collectively agree that good design is extremely important and can have a profound impact on a users impression of your business. So while a user may develop enough technical proficiency to update their site, the chance that they are also doing so in a well-designed way is quite rare.

I would be remiss if I didn't state that there are of course exceptions to all of these points. There are definitely Wordpress sites out there that are fast loading, that have never had any security issues, and are easily editable. Yes, it is possible to create a handcrafted Wordpress site that is void of the bloated code, and inaccessible markup. And to the sites that accomplish this - I doff my cap to you. These sites however tend to be the exception, not the rule. As for me - I will always prefer my chicken soup homemade over canned any day. 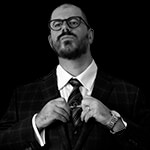